The pints of cherry tomatoes arriving fresh from Dutchess Farm are like little boxes of treasure in shades of red and gold! Full of delicious flavor, these beauties are perfect for snacking. But, if you can resist the temptation to munch on them as you travel home, I promise you’ll love this simple recipe. And, as the nights become cooler, this is an excellent dish to enjoy both the distinct Summer flavor of ripe tomatoes and the Fall coziness of an oven-warmed kitchen. 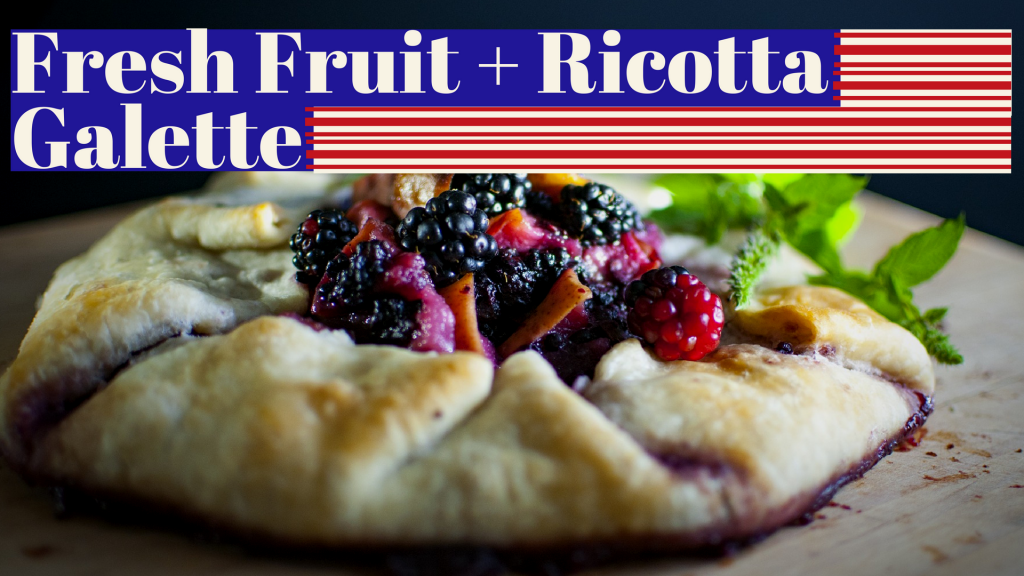 What's summer without eating food outside with friends? The recipe for this month is simple, delicious, and customizable. A perfect way to take advantage of summer harvest's fresh rewards. The main component of this dish is Labneh, a mediterranean soft cheese, much like ricotta, and is extremely versatile. It can be used in mezze platters like this, or can even be used in sweet dishes like olive oil cake. It binds the other elements together into a fantastic party (or really anytime) dish. Recipe adapted from The Mediterranean Dish: https://bit.ly/2J0LgjT
Bulk Department Cooler & Freezer Department Grocery Department Produce Department Recipes 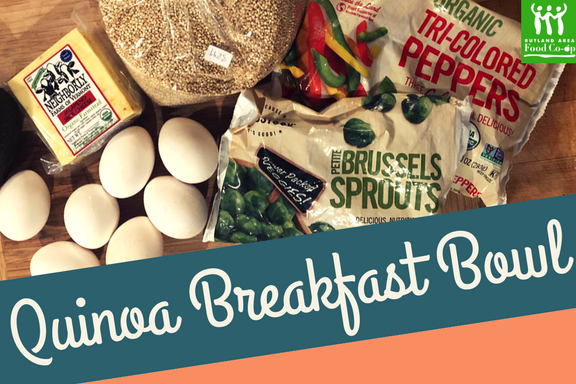 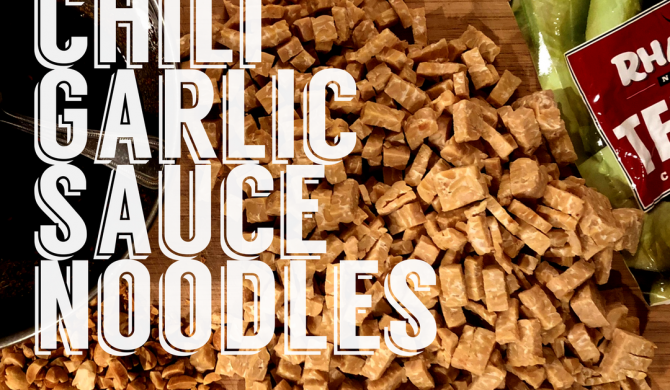 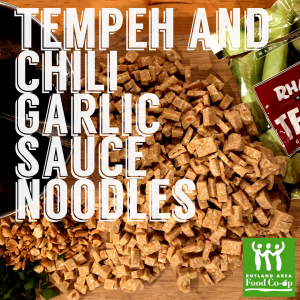 One of the great signs that winter is on the outs in Vermont is the start of the sugaring season.  As the temperatures rise in the day, the sap begins to flow and the plastic lines stretching throughout forest begin to be filled again.  After boiling and treating the sap, we get that most wonderful of Vermont exports, maple syrup.

A great addition to pancakes and waffles, and a great substitute for sugar in coffee, maple syrup sometimes stays relegated to the breakfast end of our meals, but it can add great, bold flavor to our dinners and lunches as well.  This recipe, which is adapted from a great blog, Budget Bytes, originally used brown sugar as its sweet factor, but substituting maple syrup gives it a more local flavor.  Also to try and keep it more health conscious, swapping the pork for tempeh lets this great meal be delicious, sustainable, and healthy.

Who doesn’t like a sweet and spicy dish on a cold late winter night? 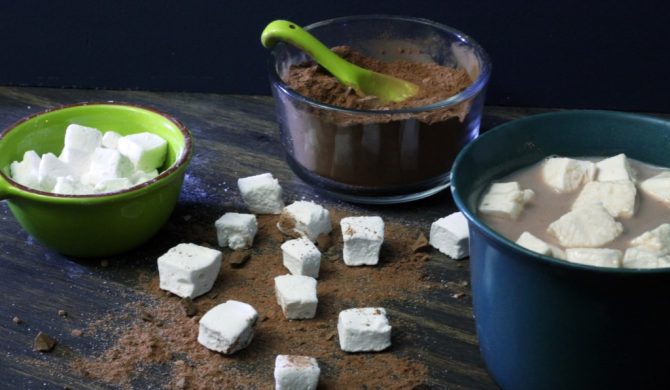 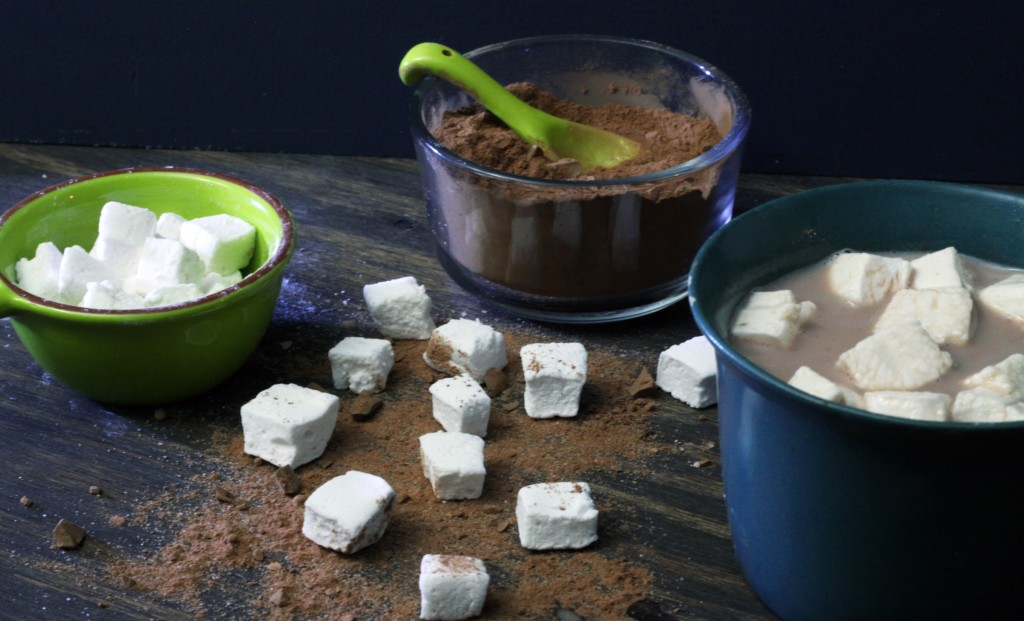 Nothing says winter comfort like a big mug of hot chocolate overflowing with tiny marshmallows. Although, sometimes hot chocolate packets can be a bit disappointing. They lack the right flavor and freshness that really makes a cup of hot chocolate.

Where’s the compromise between instant mixes and hot chocolate with flavor? In making our own supply of instant mix. Instead of heading to the baking cabinet each time we want a cup, we can premix quality ingredients (with plenty of chocolate) and have a supply ready to go at any time. No packets required.

This recipe does not include powdered milk, so instead of mixing with water, you can mix with your favorite dairy or non-dairy milk.

This recipe is adapted from the Smitten Kitchen, and was adapted from Cook’s Illustrated. The result is dark, chocolatey, and not very sweet. You may want to add more sugar if you like a sweeter hot chocolate, but when topped with marshmallows we think you’ll find it sweet enough. The addition of corn starch may seem odd, but it helps the mix more easily dissolve into liquid. 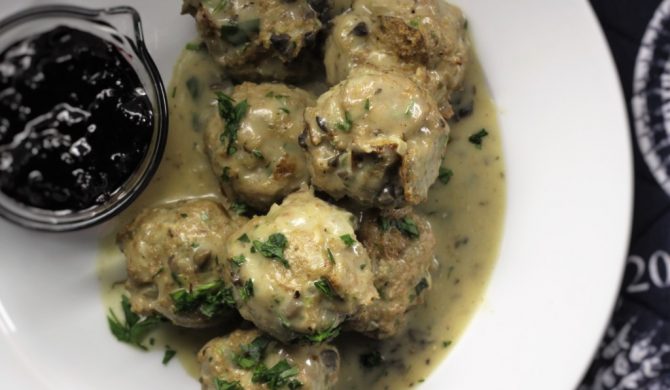 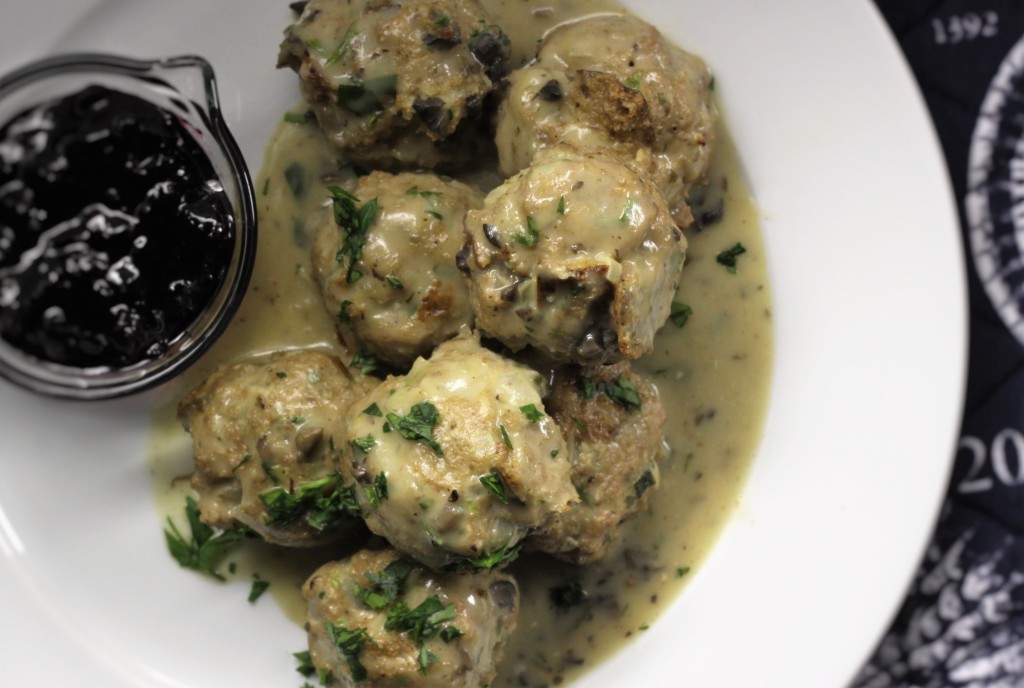 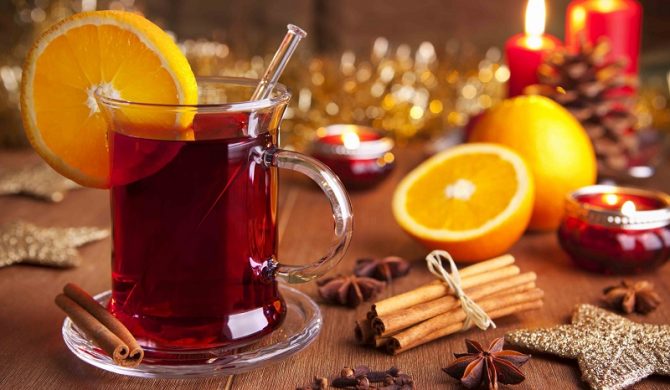 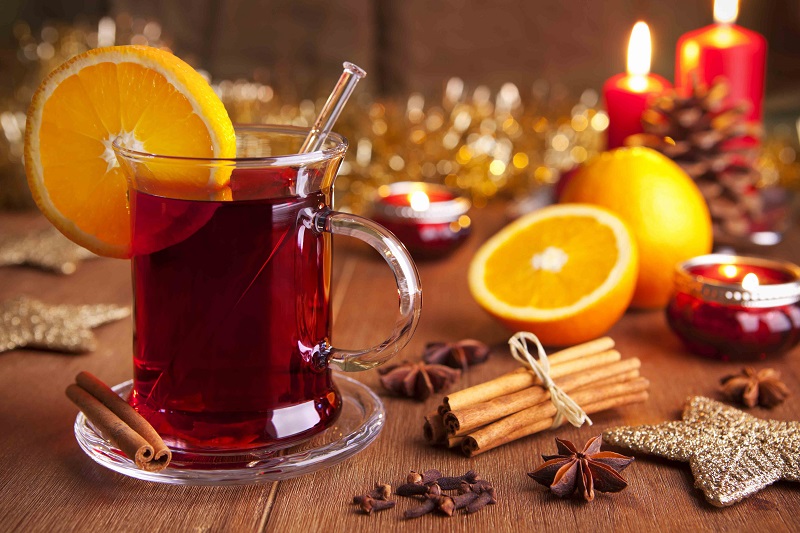 This is a recipe that you can really make your own. You can add more of one thing and less of others, improvise ingredients, and even swap out the cider for wine. There isn’t one “right” way to make it. Vary the spices depending on personal preferences and how spicy you want it to be. 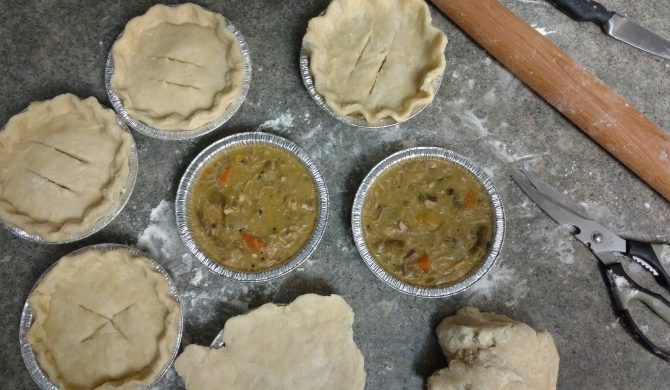 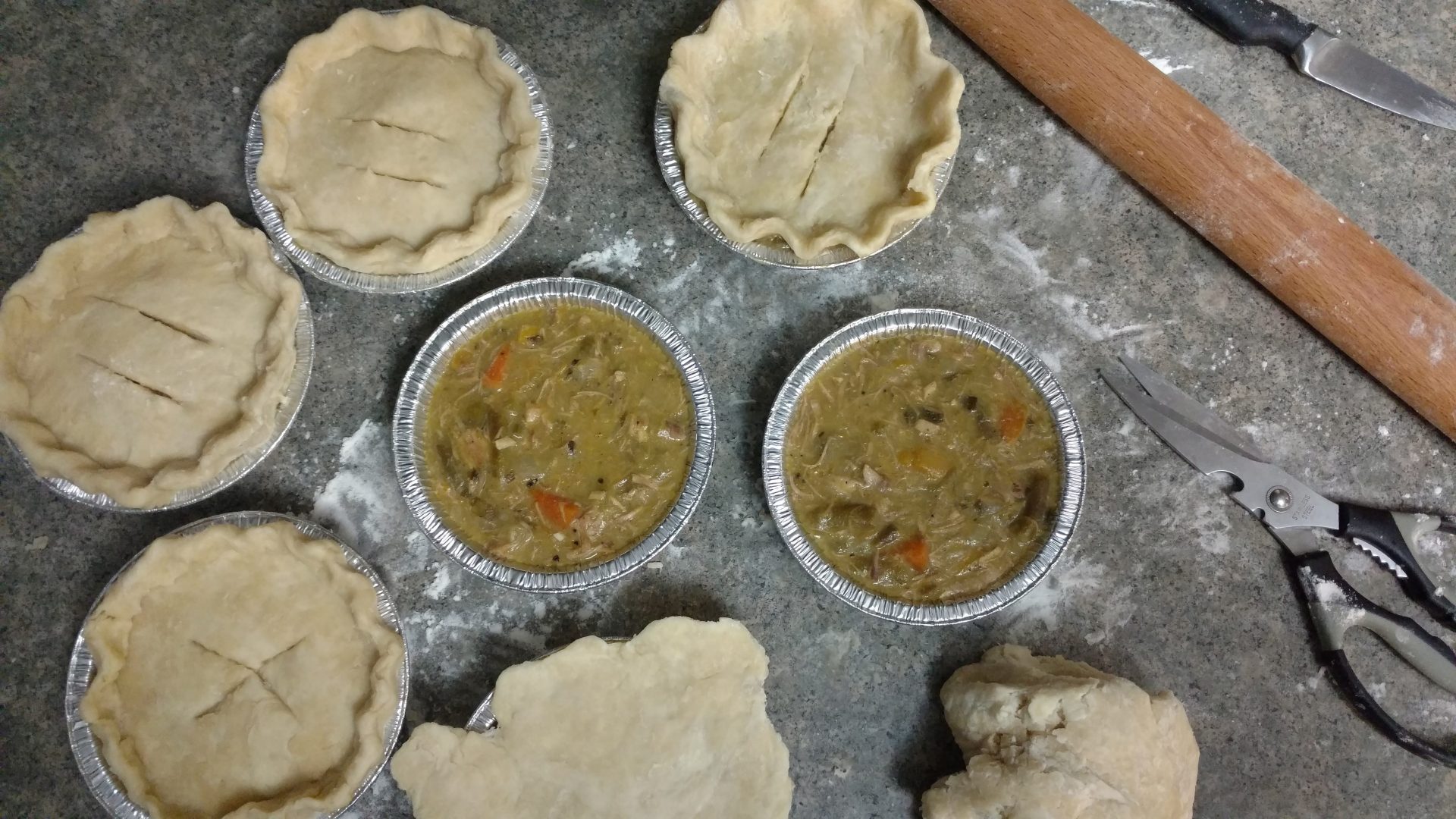 A good pot pie has two components: filling and crust. When I first set out to make a big batch of these pies, I realized something. Pot pie filling is essentially thickened soup. That means if you have a favorite chicken or turkey soup recipe, with just a few tweaks you have filling for pie. Even better is that you can set yourself up with two large pots on the stove and make a double batch. Keep one pot as soup to eat now and thicken the other for pot pies for the freezer. It’s a great way to save yourself some time.

When it comes to pie, the key is to always start with a good crust. For pot pies, omit any sugar (if included) and if you have it, toss in some fresh thyme leaves for an extra herby, earthy flavor that’s baked right into the crust.

I found that with small pies, a top and bottom crust felt like too much dough. Instead, I only use a top crust. After rolling out my dough, I just flip one of the small pie tins over and press down along the edge to cut out the perfect size topper. The filling is cooked ahead of time, but you do not need to prebake the crust before freezing. Raw pie dough freezes wonderfully, and the whole thing can be transferred directly from the freezer to the oven when ready to eat.

As with soup, you can certainly improvise the ingredients — including the types of vegetables and choice of meat. I typically go through the fridge and grab whatever vegetable odds and ends I have, and chop those up into small cubes. Or I see what I have in the freezer that can be added directly in, such as corn kernels, peas and green beans. I aim for an equal ratio of meat to vegetables.